Te Waihora is rich in both species number and abundance of fish, with almost 50 species recorded in the lake (fresh and saltwater species)

Te Waihora/Lake Ellesmere has outstanding significance as a tribal taonga, representing a major mahinga kai and an important source of mana for Ngāi Tahu. The original name for the lake – Te Kete Ika o Rākaihautū/The Fish Basket of Rākaihautū  – is a reference to Te Waihora being a major tribal resource. (Water is a taonga of the utmost importance, playing a central role in the culture, traditions and ongoing identity of the iwi, particularly in relation to mahinga kai. Water is a source of food and physical sustenance and is of significance with regard to mana and spiritual nourishment).

"There was a time when pātiki/flounder could be seen swimming above the shingle lake bottom – a time when tuna/eels were so plentiful the creeks stirred, slippery and black; and plant life grew abundant and rich. It was a time of balance and health. Decades of settlement and farming though, have taken their toll and the lake has been significantly polluted."

Te Waihora is rich in both species number and abundance of fish, with almost 50 species recorded in the lake (fresh and saltwater species). Many of the fish are migratory and spend only part of their life in the lake or in the lake’s tributaries. Tuna/eels and pātiki/flounder are significant mahinga kai species for Ngāi Tahu, along with aua/yellow-eyed mullet and īnanga/whitebait. All are diadromous species, meaning they spend part of their life cycle in the ocean.

Visiting marine species are occasionally present in the lake and include basking shark, elephant fish, red cod, sunfish and seahorses. Marine mammals such as elephant seals and dolphins have also been seen in the lake.

Commercial fishing in the mid-1900s

In the late 1800s, there were up to 250 men and 20 boats fishing from Taumutu at one time, catching pātiki/flounder. Commercial fishing for tuna/eels came later and began to take off in the mid-1900s.

During the 1970s and early 1980s, large quantities of tuna/eels were caught, progressively reducing the average size of eels in the lake, impacting the customary fishing practices of Māori, which are based on allowing the animals to reach a larger size before harvesting.

An export deal struck in the 1970s saw large quantities of tuna/eels from Te Waihora – up to 800 tonnes in a year – exported to London, where they are turned into an East End delicacy – jellied eels.

In 2003 NIWA published a report reviewing the eel fishery in Te Waihora.

Both these commercial fisheries were included in the quota management system (QMS) introduced in 2000.

The Te Waihora tuna fishery is restricted to shortfin eels, with fishers actively returning any longfins caught. The quota area covers all of the catchments north of the Rakaia River to Te Waihora, although almost all of the catch is from the lake. The current allowable commercial catch for tuna/eels is 122 tonnes per annum, mainly caught between October and March.

Three species of pātiki/flat fish (black, yellow-bellied and sand flounders) were included in the QMS. Te Waihora is part of a larger management area extending from north of the Clarence River south and around to the West Coast.

Te Waihora is only a small part of this management area, with pātiki mohoao/black flounder being the main species of flatfish caught in the lake.

Fish species to look out for at Te Waihora 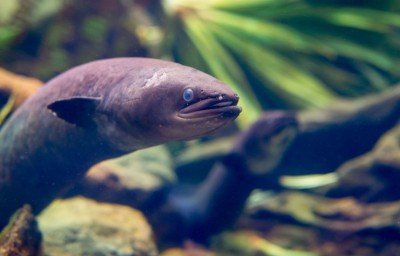 There are two species of tuna/eel in Te Waihora: tuna kuwharuwharu/the longfin eel and tuna hao/the shortfin eel. Both species are indigenous, and while the shortfin eel is also found in Australia, the longfin eel is endemic to Aotearoa New Zealand (only found here). Compared to the shortfin, numbers of longfin eels have declined over the years and they are classified as ‘nationally threatened’ according to the Te Papa Atawhai/Department of Conservation. classification system.

Tuna/eels are secretive and prefer water with extensive cover such as raupō, weed beds, and overhanging grasses. They migrate upstream as elvers (babies) to find suitable adult habitats in the tributaries of Te Waihora. They spend many years – sometimes up to 80 years for longfins – in the streams before migrating to the Pacific Ocean to breed and then die. Pātiki belong to the flatfish family, and five species are recorded in Te Waihora. The most common is the mohoao/black flounder followed by pātiki totara/yellow-belly flounder and the pātiki/three corner flounder. All three species are commercially fished and also provide an important customary fishery for Ngāi Tahu. Īnanga/whitebait can only migrate in from the sea when Te Waihora is artificially opened, and southerly storms can close the lake up shortly after it is opened, therefore getting opening timing right can make or break a season for local whitebaiters.

Whitebait is predominantly the young of inanga (galaxias maculatus), but there are four other fish species from the galaxiid family that are sometimes caught in the nets too – shortjaw kōkopu, banded kōkopu, giant kōkopu, and koaro. (If you ever catch golden-coloured bait, you could consider releasing them, as they are from the rarer species of banded kōkopu and giant kōkopu).

Īnanga and koaro adults would have both been very abundant in Te Waihora in the past, and were harvested in large amounts. Koaro as a species has unfortunately almost completely disappeared from Te Waihora, and other lakes in Aotearoa New Zealand.

Māori developed many expert ways of catching Īnanga, which were often adopted by the early Europeans using modern materials. Te Waihora was a good source of whitebait for the people of Ngāi Te Ruahikihiki, based at Taumutu and Ngāi Tahu whānui passing through on their travels.

Elsdon Best in his 1929 book ‘Fishing Methods and Devices of the Māori’ described one method of how whitebait were caught in the lake with a long closely-woven harakeke/flax net called a kaka. One end was held onshore, while the other end was scooped around by people in a small waka. Catches were often placed on mats to dry in the sun, then stored away for later consumption.

One factor for a successful catch is good spawning of the adults in the prior autumn. However, spawning habitat of the whitebait species has been degraded and destroyed over the past few centuries by drainage of wetlands, and replacement of stream bank vegetation with pasture grasses and grazing animals.

Īnanga are known to lay their eggs on vegetation, such as native grasses, in the tidal zone on a spring tide between fresh and salt water. Eggs are left high and dry when the tide drops, then are flushed out to sea in following spring tides. People are starting to discover where these inanga spawning areas are, or were in the past, and they are restoring them. The spawning habits of the other whitebait species are still shrouded in mystery. Wai kōura/freshwater crayfish were recognised as taonga species for Ngāi Tahu whānui in the Ngāi Tahu Claims Settlement Act (1998). They are still popular eating today, with a few aquaculture facilities even growing them as a delicacy. Wai kōura were once very commonplace, but due to the removal of riparian vegetation and the introduction of the predatory trout, Paranephrops zealandicus, the wai kōura species found around Te Waihora, is now classed as ‘At risk – declining’ by the New Zealand Threat Classification System. As they are found nowhere else in the world, there is even more reason to protect them.

Taraute/brown trout were introduced to the catchment in 1868. By the 1930s the lower Waikirikiri/Selwyn River was considered to provide some of the best brown trout fishing in the world. As well as providing recreation, trout were harvested commercially for Ōtautahi/Christchurch fishmarkets from a number of tributaries of Te Waihora.

Unfortunately, since the 1970s a dramatic decline in the health of the fishery has been observed. Contributing factors might include low flows in rivers and streams due to abstraction and climate, degradation of the rivers and lake habitat including sedimentation and poor water quality.

An article by Brett Painter from 2009 sets out the problems in more detail.